So a little birdie called me this week to tell me that on top of cutting the staffing to about 30 percent of previous years. (Guess since they’ve obliterated the grandstands, they don’t need anyone to staff them…)
They are not putting in any run offs.

That’s right. On an uber tight street course, with two fields of drivers most of whom have never driven here, in cars that have never been on this circuit, they (the royal “they”, the braintrust that are driving this apple cart) are eliminating the one, not even certain, means of preventing carnage and destruction. Apparently AGR found out that while they own the race, they don’t own the barriers. An independant crane company was paid to install and then remove them every year. So rather than fork out the extra money for the barriers and tires that these runoffs require, they are just going to put an extra layer of tires.

Those sitting in the Turn 3 grandstands better wear flack jackets…
(oh no wait, the got rid of the Turn 3 stands, as well as the Turn 6/7 stands, and half of the Silvers, and the outside of Turn 1 if I’m not mistaken… nevermind, the 10 people that know about the race and might show up should be safe… wish I could say the same for the drivers and corner workers… )

I only have one thing to say…

Are they out of their fucking minds??

To save a couple of thousand dollars they are willing jeopardize the event, the teams lively hood and the drivers?? Not to mention track workers and spectators!

Are they really that arrogant and that cheap?
Have they done zero research?
Do they want this to be the first AND last Honda Indy Toronto?

They already think this event is just going to magically happen with pretty much ZERO promotion. It’s less than a month and there is nary a poster, billboard, checkered flag anywhere! Oh wait, I did see a poster hastily taped on the door of Hooters when I walked by the other day… 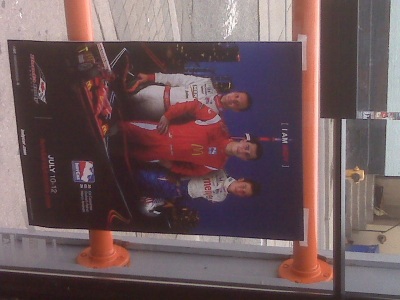 *don’t know why it’s still sideways… maybe it’s a metaphor… *
Yup… Ed Carpenter, Graham Rahal, and Marco Andretti… Those three will get the Canadian’s buzzing!! Not!

What used to be a spectacular event that the city and all the local downtown establishments would get decked out for and promote months in advance is flying so far under the fucking radar right now I’m not even convinced it’s actually happening.

The least and the lesser were on breakfast television last Thursday.
Really, who better to have up here promoting the race and getting people interested than Marco Andretti? I mean it’s not like local hero Paul Tracy is in the race or anything… Pshaw….

They were on for barely two minutes and talked mostly about the Andretti family. Michael did mention how AGR promotions came to acquire the race. (And to his credit, you can tell how much he loves this race/track) but that was it. Nothing about the race, the support series, the fact that Tracy, Tags & Hinch will be racing, hell they didn’t even plug Parkco’s Gillette publicity stunt later that day (which may or may not have happened as it rained all day)

One thing I’ve noticed, AGR promotions is in the business of promoting AGR. Every tidbit of “news” surrounding the race revolves around AGR drivers. (The weekly pit notes this week talked about the BT appearance and included quotes from the princess about racing in Toronto.
I mean it’s not like Paul Tracy announced this week that he was running at the Glen so he could be better prepared for Toronto…
Maybe Paul should have struck a deal with AGR for the race, then at least he would be getting some media play.

That said, PT and Vasser are in town tomorrow to make his sponsorship announcement. (Honda Canada) Honda is now running their big “race event” sale ads, and using the show car in their commercials and saying the word Indy multiple times… what they AREN’T saying is that the RACE is happening in Toronto in 3 fricken weeks! Not even a silent graphic with a date and url. Fuck! that’s so basic and simple.

My heart is breaking for my home race. The city should be ramping up, yet there is barely a whisper that it’s around the corner.

Anyway, I’m heading down to the press conference in the morning. Hopefully the “real” journalists will bring up the lack of barriers and promotion, otherwise I just may have to get a little brassy tomorrow morning…