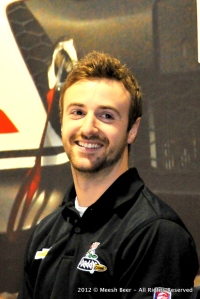 I must say, I was suitably impressed with the CME this year. Just walking into the show on Friday I immediately had the sense that it had finally found it’s legs after several awkward toddler years.

Is it spectacular? Not yet, but you could definitely see and feel the potential and growth, more so than during any other year I have attended.

There are still some niggley things to work out. Flow of the show itself (layout of aisles/booths, scheduling of the mainstage/seminar room talks, sound on the mainstage) but those are all fixable technical issues. Other than that, the substance of the show itself, well, things were much improved in that area.

There was a larger corporate presence this year, which not only added to the look/feel of the show, but also upped the quality of the presentations and seminars. Sadly, I had to miss out on some I really wanted to see, due to scheduling conflicts. (will suggest a doubling up on presentations for next year)

Though I jinxed it on Thursday by talking about the weather (Bad Meesh!) and then predicting Snowmageddon (which actually did happen, though not that bad) the foot traffic appeared to be heavier, right from the get go. I noticed more people milling about, and with a larger hall this year and wider aisles, you would expect the opposite interpretation. I also heard vendors remarking that they had had more inquiries and traffic at their booth on the Friday than they had had during the entire weekend in previous years. So it would appear to have been a successful weekend no matter what side of the aisle you were on.

One can only assume, especially when you take into consideration all of the announcements about the growth of racing and racing venues in Canada during this year’s show, that next year we will see even more outreach for this “little show that could”.

I can’t stress enough how informative and enjoyable the discussion panels and Q&A’s are, especially if you’re a race fan. The opportunity to speak with drivers and industry leaders in a casual setting in the off season, when they aren’t bogged down by the stresses of the season yet, is invaluable, and rare.
Unfortunately, my trusty digital recorder decided he had had enough this year, and failed me on two occasions over the weekend, otherwise you would hear a complete example of what you missed. Trust me. They were phenomenal discussions! But hey, maybe that is better. Maybe that is what will convince you to pop up and check out the show next year for yourself.

Anyway, here are a few shots from the weekend.  (will upload a gallery elsewhere later, as FB pic resolutions are shite)

I didn’t take too many general show pics this year, as I was too busy meeting, greeting, listening and hobnobbing! But I did manage some from the presentations I was able to enjoy.

I will also be posting an interview I did with the Mayor of Hinchtown 😉 later this week. Always great to chat with that boy. Feel like I’ve watched him grow up before my eyes.

EDIT: OH Eureka! So, turns out I did manage to capture all but a little bit at the end of the Media Panel Discussion on Saturday! I will figure out how to upload it so you can hear it.

Also, Stephanie from More Front Wing managed to capture the Q&A from Hinch so head over there and have a listen to that!  (Thanks for choosing one of my pics for your story Steph! 😉 )

So there ya go! Another year under our belts to kick off what is setting up to be a pretty damned exciting racing season for all genres of racing, both here in North America, and across the pond!

Thanks again to everyone at Inside Track magazine, specifically Greg MacPherson, for their hard work putting this show together and assistance on site! See you next year!